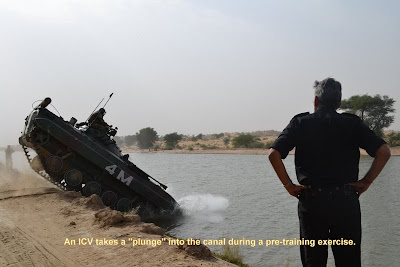 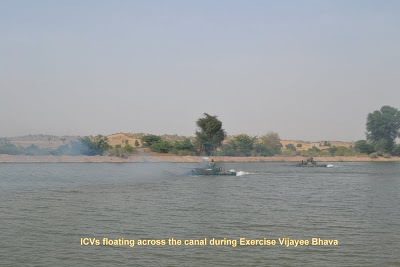 Exercise ‘VIJAYEE BHAVA’ (BLESSED TO WIN), the first amongst a series of Western Command routine annual summer exercises is underway in the South Western Sector. The manoeuvres are being conducted in North Rajasthan to test the operational & transformational effectiveness of the Ambala based Kharga Corps as also validate new concepts which have emerged during the transformation studies undertaken by the Army. The Pivot Corps manoeuvres are scheduled to take place later this month. The Command HQ synergises the operations of the Pivot and Strike Corps.

This Exercise envisages sustained massed mechanized manoeuvres, in a simulated environment, by composite combat entities, ably supported by air and complemented by a wide array of weapon systems and enabling combat logistics.

The Indian Army, which is working towards a ‘capability based approach’, has embarked on a series of transformational initiatives spanning concepts, organisational structures and absorption of new age technologies, particularly in the fields of precision munitions, advance surveillance systems , space and network-centricity. These will be fielded and trial evaluated by nominated test bed formations and units participating in the exercise. The thrust of the transformational initiative is for the Army to emerge as a modern, lean , agile and enabled force.

While, the acquisition of hi-tech weaponry and combat support systems is an essential pre-requisite for a capability based approach, honing of human skills to harness technological advancements in military hardware is a never ending challenge. During the conduct of the exercise, combat decisions taken at each level of command will be analysed for their ability to synergise the application of state-of-the-art weapon platforms, to achieve optimum results. Such routine exercises with troops are conducted during the training cycles of formations.

Read in your own script